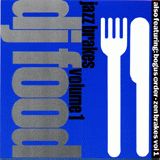 DJ Food is an electronic music project currently headed by Kevin Foakes, aka Strictly Kev. Originally conceived by the members of Coldcut on the Ninja Tune independent record label, the project started in 1990 on the premise of providing metaphorical "food for DJs". DJ Food released the Jazz Brakes series, with Jazz Brakes Volume 3 being the most successful. The records consisted of collections of breaks, loops and samples, that could be used for mixing, remixing and producing.

The later DJ Food albums have developed with shades of Latin, dub, techno, ambient, and Jungle.

The 1995 album, A Recipe for Disaster was a conscious move away from the Jazz Brakes volumes to form more of an identity as an artist, and a remix album of tracks from all 6 LPs, entitled Refried Food was released the following year. The more recent release, Kaleidoscope, features guest artists including Bundy K. Brown (formerly of Tortoise, Directions in Music, Pullman) and voiceover artist and jazz poet, Ken Nordine.